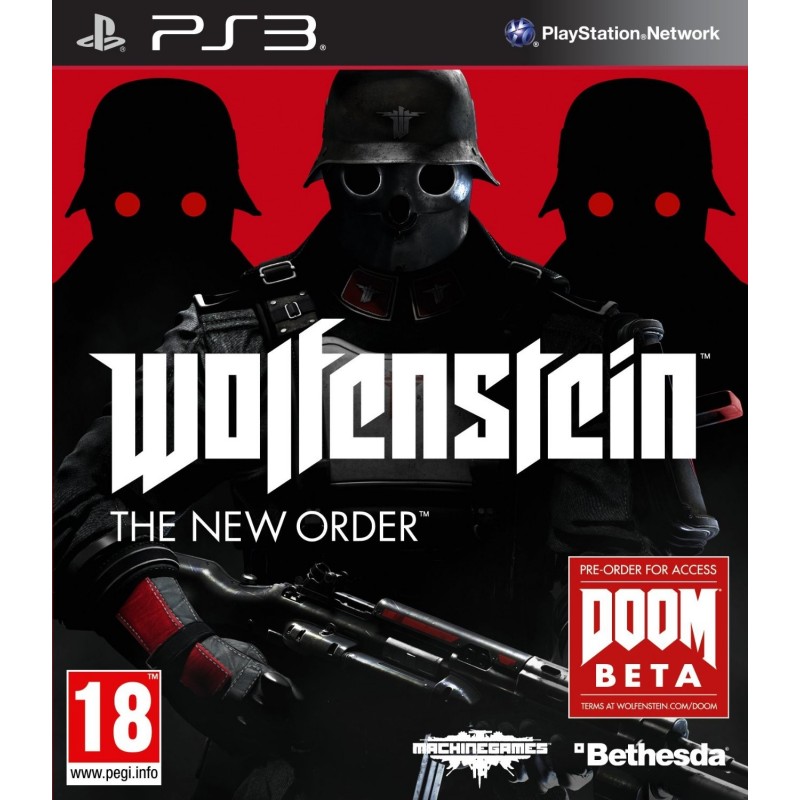 Three years after the destruction of the Black Sun portal, the Nazis have deployed advanced technologies, enabling them to turn the tide against the Allies. At dawn on 16 July 1946, U.S. special forces operative Captain William "B.J." Blazkowicz (Brian Bloom), accompanied by pilot Fergus Reid (Gideon Emery) and Private Probst Wyatt III (A.J. Trauth), take part in a massive Allied air raid against a fortress and weapons laboratory run by his nemesis, General Wilhelm "Deathshead" Strasse (Dwight Schultz). The three are captured and brought to a human experimentation laboratory where Deathshead forces Blazkowicz to choose who he will gruesomely kill, Fergus or Wyatt, before leaving Blazkowicz and the survivor to die in the laboratory's emergency incinerator.[8] They escape the laboratory, but Blazkowicz suffers a critical head injury during the escape, rendering him unconscious and putting him in a coma. He is brought to a psychiatric asylum in Poland, where he remains in a vegetative state for 14 years from which he is unable to awake. He is cared for by the asylum's head nurse Anya Oliwa (Alicja Bachleda) and her parents, who run the facility under the Nazi regime. Blazkowicz watches as Anya's parents are regularly forced to hand patients over to Nazi authorities, who deem them Untermenschen for their mental disabilities.[9]

In 1960, fourteen years after Blazkowicz' admission, the Nazis order that the asylum is to be shut down, killing all the patients and executing Anya's family when they resist. Blazkowicz awakens from his vegetative state as he is about to be executed, killing the extermination squad and escaping the asylum with Anya.[9] Blazkowicz and Anya drive to her grandparents' farm, where they inform him that the Nazis won the war by forcing the United States to surrender in 1948, and that the members of the ensuing Resistance were captured. Blazkowicz interrogates a captured officer from the asylum (he was hidden in the trunk of a car), learning that the top members of the Resistance are imprisoned in Berlin before brutally executing him with a chainsaw. Anya's grandparents smuggle her and Blazkowicz through a checkpoint in Stettin before they travel to Berlin. During the train ride, Blazkowicz and Anya enter into a romantic relationship.[10] When they arrive, Anya helps Blazkowicz break into the prison, where he rescues the person he spared fourteen years prior (Fergus or Wyatt)[11] and finds that the Resistance movement is a revived Kreisau Circle led by Caroline Becker (Bonita Friedericy), who was left paralyzed due to her injuries at Isenstadt.[12]

The Resistance execute an attack on a Nazi research facility in London, bombing their base of operations, stealing secret documents and prototype stealth helicopters.[13] The documents reveal the Nazis are relying on reverse-engineered technology derived from an ancient organization known as Da'at Yichud, which created such inventions as energy weapons, computer AI's, and super concrete; however, it is also revealed that someone is tampering with the super concrete's formula, making it susceptible to mold deterioration. The Resistance discover a match with Da'at Yichud member Set Roth (Mark Ivanir), who is imprisoned in a forced labor camp.[14] Blazkowicz agrees to go undercover inside the camp and meets Set, who tells him that the Nazis have been using technology made by him and other Jewish scientists to mass-produce and control robots, and offers to help the Resistance in return for the destruction of the labor camp. Blazkowicz finds a battery for a device that controls the camp robots, which he and Set then use to destroy the camp and rescue prisoners.[15]

Set reveals to the Resistance that the Nazis' discovery of one of the Da'at Yichud caches, which included advanced technology centuries ahead of its time, is what allowed Germany to surpass the Allies in military might and ultimately win the war. Set agrees to assist the Resistance by revealing the location of one such cache, but states that the Resistance requires a U-boat to access it.[16] Blazkowicz obtains a U-boat, but discovers that it is the flagship of the Nazis' submarine fleet, and is equipped with a cannon designed to fire nuclear warheads, which requires codes from the Nazi lunar research facility to operate.[17] Blazkowicz uses the technology found in the Da'at Yichud cache, namely the Spindly Torque—a sphere that destroys the super-concrete—to steal the identity of a Nazi Lunar scientist and infiltrate the Lunar Base.[18] He succeeds at obtaining the codes, but upon returning to earth, he discovers that Deathshead has mounted an assault on the Resistance base, capturing some of the members.[19]

The Resistance use the nuclear codes and the Spindly Torque to mount an assault on Deathshead's compound. Rescuing the captured resistance prisoners and evacuating them, Blazkowicz makes it to the top of the tower, struggling to Deathshead's workshop. Inside, Deathshead greets Blazkowicz, revealing to him that he possesses the brain of the soldier that Blazkowicz chose to die, and puts it in a robot. The robot comes alive and assaults Blazkowicz, who defeats it and puts his friend to rest by destroying the brain. Commandeering a larger robot mecha, Deathshead then attacks Blazkowicz, who gets the upper hand and destroys the robot, dragging Deathshead out of it. He repeatedly stabs Deathshead, who pulls out a grenade, which explodes and mauls Blazkowicz. As a gravely wounded Blazkowicz crawls towards a window, he mentally recites The New Colossus as he watches the Resistance survivors boarding a helicopter, alongside Anya and Set. Seeing that they have reached safety, and bleeding heavily from his injuries, Blazkowicz orders the Resistance to fire the nuclear cannon.[20] After the credits, a helicopter is heard approaching.