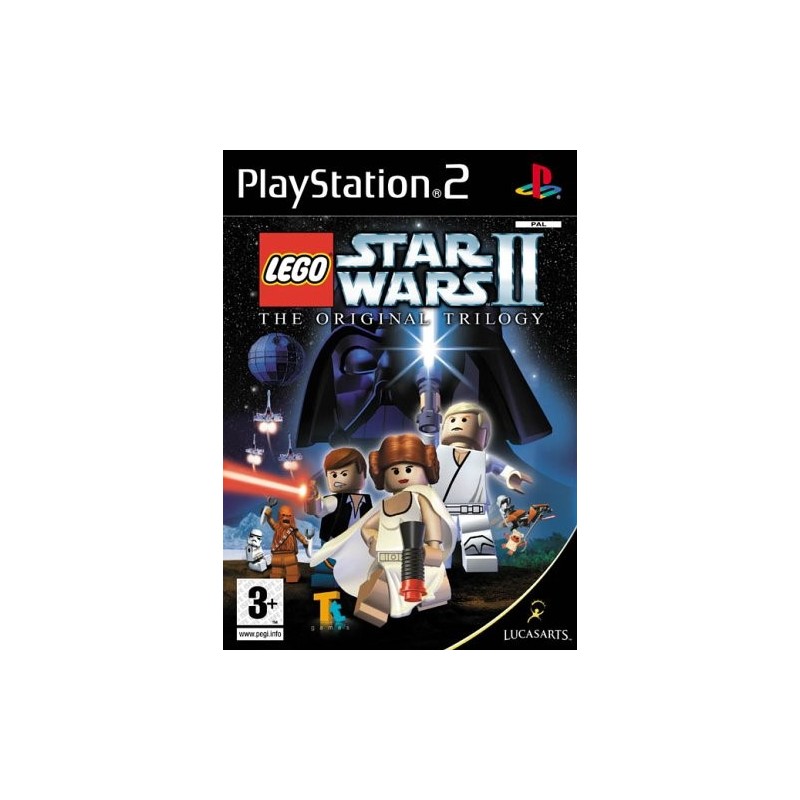 Lego Star Wars II's gameplay is from a third-person perspective, and takes place in a 3D game world that contains objects, environments and characters designed to resemble Lego pieces. Its gameplay—a combination of the action-adventure, platform, and sometimes puzzle genres—shares elements with that of Lego Star Wars: The Video Game (2005).While Lego Star Wars followed the events of The Phantom Menace (1999), Attack of the Clones (2002), and Revenge of the Sith (2005), Lego Star Wars II is based on Star Wars (1977), The Empire Strikes Back (1980), and Return of the Jedi (1983). The game comically retells the trilogy's events using cutscenes without dialogue.The player assumes the roles of the films' characters, each of whom possess specific weapons and abilities. At any time, a second player can join the game, by activating a second controller. During gameplay, players can collect Lego studs – small, disk-shaped objects, that serve as the game's currency. The player has a health meter, which is displayed on the game's heads-up display. The player's health is represented by four hearts; when these hearts are depleted the player dies and a small amount of their studs bounce away. However, they instantly respawn and can often re-collect the lost studs.

The game's central location is the Mos Eisley Cantina, a spaceport bar on the planet Tatooine. At the counter, the player may use their Lego studs to purchase characters, vehicles, gameplay hints and extras, or activate cheat codes. In a small area outside the cantina, players may view collected vehicles.The game is broken into levels, which are accessed from the cantina;each film is represented by six levels,representing key locations and scenes in that film. The locations include Hoth, Bespin, Dagobah, Tatooine, the Death Star, and Endor. The game also features bonus levels. During levels, the player defeats enemies, builds objects out of Lego bricks and drives vehicles,Certain levels are played entirely while piloting vehicles, including a TIE fighter, a Snowspeeder, and the Millennium Falcon. Levels must first be played in Story Mode. This unlocks the next level as well as a Free Play mode for the recently completed level. Gameplay is identical in the two modes. However, Story Mode restricts playable characters to those followed in the film scenes the levels are based on, while Free Play offers all those unlocked. Levels can be replayed in either mode to collect studs and secret items.

Three types of secret items are available: gold bricks, minikits, and power bricks. Within each level is hidden one power brick. When a power brick is collected, its corresponding extra, such as invincibility or stud multipliers, becomes available for purchase. Each level also contains ten hidden minikits, that is, ten pieces of a Star Wars vehicle. When all ten have been collected, the player is awarded a gold brick. Collecting a certain number of gold bricks unlocks free rewards, such as a spigot that spews out studs. Gold bricks are also awarded when levels are completed, and when a predefined number of studs is accumulated in a level; ninety-nine gold bricks are available.The vehicles represented by the minikits are displayed outside the cantina. As each vehicle is completed (all ten minikits collected), it becomes available for play in a bonus level.